The prevailing approach to measuring global inequality pools all household incomes—as  measured in sample surveys—across the world. One then measures inequality in this global distribution the same way one measures inequality within one country. A good example of this approach is found in Lakner and Milanovic (2016).

These measures of global inequality attribute no economic advantage to living in a richer country beyond what is already reflected in the household incomes measured from  household surveys. This restriction is hard to defend on either theoretical or empirical grounds.

One way that national income may matter stems from the longstanding idea of relative deprivation. This postulates negative economic gains to co-residents. Then we can rationalize a nationalistic view that “global inequality” is just the average national inequality across countries. This emerges as the limiting case in which it is relative income within the country of residence that matters.

However, that is hardly plausible. One can point to reasonable arguments for positive external effects of living in a richer country at given own income. Examples of how this can happen include the likely positive correlation between national income and factors conducive to a higher long-run personal income, better public services, and greater security. None of these gains are likely to be properly reflected in current incomes as measured in surveys.

The implication is clear: the (large) differences in average incomes found between rich and poor countries create an extra (horizontal) inequality between their residents, not reflected in their current incomes, as observed from surveys. This is a source of downward bias in prevailing measures of global inequality. Yet the likelihood that living in a richer country delivers gains to economic welfare that are not reflected in survey-based incomes has been entirely ignored by past measures.

I find that this issue is highly salient to the quantitative measures obtained for global inequality. If one defines economic welfare in terms of relative income alone then one sees far less inequality in the world than if one puts a sizable value on the external benefits of living in a richer country. Using what can be considered the ideal inequality measure for this purpose, namely the Mean Log Deviation (MLD), the paper finds that relative deprivation theory implies that global interpersonal inequality is far lower than prevailing measures suggest since it is then entirely within countries.

This changes dramatically when one allows a positive value of national income (at given own-income), such as when living in a richer country brings benefits in terms of access to non-market goods and services, and better opportunities for private support in times of need. From what we know based on past global studies using micro data, the national income effect could well be 50% or more of the own-income effect on subjective wellbeing. Then global inequality is far higher than prevailing measures suggest, and far higher than found in even the most unequal country.

For example, suppose that incomes of all the richest 1% in the world are actually double the numbers in Lakner and Milanovic (2016) for 2008. This would add about 0.1 to the global MLD. I find that this is about the same as adding a modest 10% of log national-mean income to log own income to allow for the gains from living in an economically-better off country.

So the level of global inequality could well be very much higher than current measures suggest, once one allows for the likely external gains from living in a richer country. Nonetheless, I still find that the stylized fact that global inequality has been falling since around 1990 is robust to all except a seemingly high negative weight on national income, such as due to relative deprivation. The finding of falling between-country inequality is robust whatever value one attaches to national income in assessing individual economic welfare.

There is almost certainly more inequality in the world than we think, but it is likely to be falling.

Lakner, Christoph, and Branko Milanovic, 2016, “Global Income Distribution: From the Fall of the Berlin Wall to the Great Recession,” World Bank Economic Review 30(2): 203-232.

With today’s release of an updated version of the World Bank’s PovcalNet data site, it is a good time to take stock of progress toward Sustainable Development Goal 1.1 (SDG1.1). SDG1.1 aims to “eradicate extreme poverty” by 2030, as defined by the World Bank’s international poverty line of $1.90 a day line. ($1.90 is an update to 2011 prices of the $1.25 a day line in 2005 prices, which is explained in this paper, “Dollar-a-Day Revisited”.

What does the new data suggest about progress toward SDG1.1?

The following Figure plots the series from PovcalNet for the overall poverty rate for the developing world over the period 1981-2015. This looks very encouraging. Of course, there will be less progress at higher lines than the (deliberately frugal) $1.90 line. But the rate of decline we are seeing for extreme poverty is clearly good news. The poverty rate is falling by a little over 1% point per year, on average, over the period as a whole. (The regression coefficient on time is -0.012, with a standard error of 0.0004, though this only reflects the time series variation.) 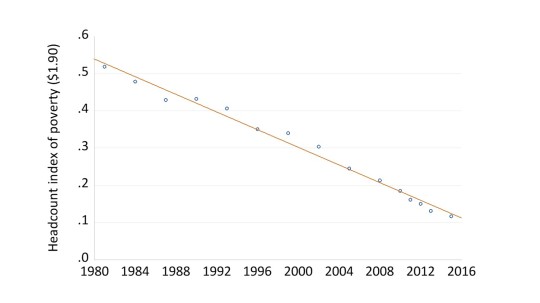 A simple linear extrapolation of this series indicates that extreme poverty will be eliminated by 2025. (A crude calculation of the standard error, again based solely on the time series, gives a value of 0.9 years, implying a 95% confidence interval is 2023-2027.)

However, if we dig a bit deeper there is another perspective on the data that is far less encouraging. Let us ask instead how long it will take for the “floor” of the distribution of consumption in the developing world to reach $1.90 a day. This is another way of defining “eradicating extreme poverty,” namely that the poorest person has $1.90 a day or more. The floor is not easily estimated, but I have outlined an approach in another paper, “Are the World’s Poorest Being Left Behind?.”  The following Figure gives my estimates of the floor over the same period. This is a weighted mean of the consumption levels of the poor, with highest weight on the poorest, and linearly declining weight as consumption rises, until $1.90 is reached. 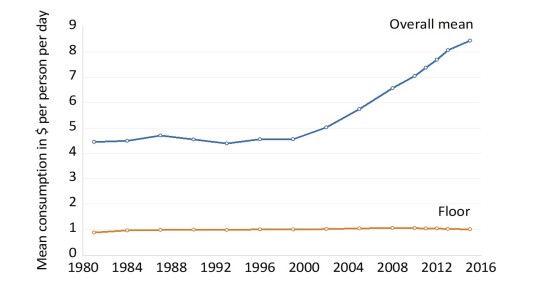 This perspective is not nearly as encouraging. The floor in 2015 is almost exactly $1.00 a day, up from $0.87 a day in 1981. There is a (statistically significant) positive slope over time to how the floor has evolved, but the slope is very small. At this rate of progress, extreme poverty will not be eliminated until 2278 (with a 95% confidence interval of 2169 to 2387). From this perspective we are way off target.

The reason is clear: the developing world is not making enough progress in reaching the poorest—well below the $1.90 line. Numbers of poor (by this frugal standard) are falling, which is undeniably good news. But the progress is not being shared enough by the developing world’s poorest. They are not exactly being “left behind” but pretty close to it.

The prospect of a much slower progress in lifting the last few % out of poverty should not be too surprising. In 2012, the President of the World Bank, Jim Yong Kim, asked me to propose a goal for poverty reduction (at a time when I worked for the World Bank, as Director of its research department). An elaboration of the note I wrote for him was subsequently published as, “How Long will it Take to Lift One Billion People out of Poverty?” That paper outlined both pessimistic and optimistic paths to lifting one billion people out of extreme poverty, and the optimistic path evolved into SDG1.1. But an important difference crept in along the way. My “optimistic path” would still leave a few % of the world’s population in poverty by 2025-30. My calculations suggested that the last few % would be a much harder job. Even my optimistic path for economic growth and income inequality would not “eradicate extreme poverty.”

The good news from the latest PovcalNet is that we are making progress in reducing numbers of poor. But a closer look at the new data suggests that “business as usual” will not achieve SDG1.1, which might well take another 200 years!

Greater effort at reaching the poorest will almost certainly be needed.