Are higher top incomes helping to lift the floor in America?

One sometimes hears claims that rising top incomes are helping to lift up the poorest. This is a version of what is often called “trickle down.” The idea has been much debated.

Is there any evidence that this could be happening in America, where the marked rise in top incomes is (understandably) getting a lot of attention, and raising concerns about the country’s future. These concerns remain even if there are trickle-down benefits to the poorest. But let us focus here on whether there is any sign that the trickle down idea might be right.

Some terminology first. “Top incomes” refers here to the incomes of the richest 1% say. The “floor” refers to the lower bound of the distribution of income—a level of income below which very few people are likely to be found for any reasonable length of time. (There are many methodological issues in measuring these two extremes of the income distribution; while I will mention some, this post is not the place to go into those issues in much detail.)

To help address the question of whether there is any sign that trickle down has been at work, this post draws on my new research paper written with Dean Jolliffe and Juan Margitic, “Social Protection and Economic Development: Are the Poorest Being Lifted-Up or Left-Behind” (coming out on June 4 as NBER WP 24665). The main data source is the microdata from the annual Current Population Surveys done by the US Census Bureau for the Bureau of Labor Statistics, spanning 1988-2016.

Divergence between the richest and the poorest: Figure 1 plots the per capita pre-tax incomes of various quantiles, including the top 1%—the income level above which one finds 1% of America’s population. Call this q(99). The graph also gives the quantiles for 95% and 90% as well as the mean and median.

And Figure 1 gives our estimate of the floor. This is a weighted mean of the incomes of those officially designated as poor in the US, with highest weight on the poorest, and declining weight as incomes rise. We see a marked absolute divergence—roughly speaking, a rising absolute gap between richest and poorest. 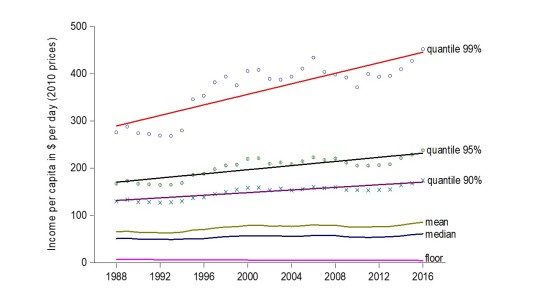 Two methodological points are notable here. First, in measuring the floor for the purpose of this graph, incomes are calculated the same way that the US Census Bureau uses for its official poverty measures. This includes money income before taxes from several sources (such as wages, salary, net-income from self-employment, social security payments, pensions, interest, dividends, alimony, other forms of periodic monetary income) but excludes capital gains and non-cash benefits such as fringe benefits or noncash government social assistance programs. Importantly, its excludes a major income source for poor people, namely the Supplemental Nutrition Assistance Program (SNAP), though more often called “food stamps”. This helps recipients cover their food spending and is explicitly targeted to the poor (living below 130% of the official poverty line). SNAP now covers about 14% of the US population. I will return to SNAP shortly.

Second, there is likely to be a downward bias in survey-based incomes of the rich, and correcting for this is likely to make the top few quantiles in the graph higher, and probably steeper. The estimates combining CPS with income tax and national accounts data in the Worldwide Inequality Database (based at the Paris School of Economics) indicate a higher growth rate for incomes of the top 1% than indicated by only using the CPS. 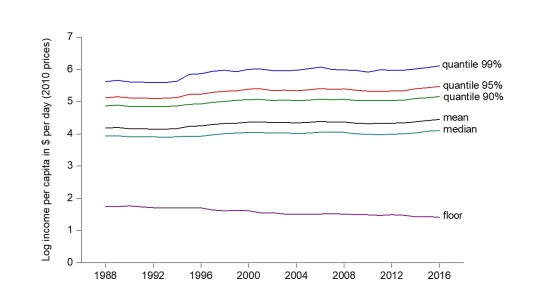 Source: Based on estimates in  the same  source as Figure  1.

Since the floor is so low—we estimate that it is around $6 per person per day—relative to the top incomes it is hard to see what is going on in the graph above. So Figure 2 uses logs instead. Now the divergence between the top and the bottom is easy to see. Not only is there no sign that rising top incomes have lifted the floor, the floor is actually falling over time. The growth rate of the floor over the whole period is -1.3% per annum. By contrast the growth rate of q(99) is 1.6% per annum.  For a family of four people, the floor fell from about 9% of q(99) in 1988 to 4% in 2016. We see relative divergence between the richest and the poorest.

Food stamps: There is another potential channel for “trickle down” namely via public spending on antipoverty programs. The new paper with Jolliffe and Margitic looks more closely at the role played by SNAP. We find that SNAP has benefited the poorest. Figure 3 gives our estimates of the floor before and after SNAP. (This is expressed as a proportion of the official poverty line, which was $15.15 per person per day in 2010, for a family of two adults and two children.)

Figure 3: The floor before and after food stamps

We find that SNAP helped raise the floor, and to stabilize it after 2000, though with signs of a decline since 2012. SNAP helped prevent the floor falling even further, especially in the wake of the financial crisis starting in 2008. Without the “SNAP stimulus” in the wake of that crisis we would have seen the floor dropping even more.  Less encouragingly, we also find that the efficiency of SNAP in reaching the poorest (the gain in the floor per $ spent on the program) has declined over time. However, it is clear from our calculations that SNAP has helped America’s poorest.

So is this a form of trickle down that has worked? That is not so clear. SNAP spending per recipient has grown with rising top incomes, though whether the latter caused the former is an open question, with arguments both ways. More tellingly, SNAP participation rates have fluctuated over time since around 1990, buffeted by politics and reform efforts, and this has led to similarly fluctuating levels of overall spending per capita of the US population. It seems likely that politics has played a more important role than a trickle down process through social spending.